Four of the worlds’ most beautiful and endangered Tortoises born, just in time to celebrate Easter!

There are few moments as memorable as bearing witness to four critically endangered Radiated Tortoise hatchlings embracing their first day in the world. On 10th of March, a glorious autumn morning, our animal care team experienced exactly such a moment when the hatchlings took their first breath of fresh air. We celebrated their birth for two full weeks, when with pure delight, on the 24th of March another hatchling made his surprise appearance!

A determined mom, who celebrates her 78th birthday this year, had dug two specially excavated holes (15cm – 20cm deep), which incubated four conservation heroes. In both holes/burrows, she laid two clutches consisting of 6 eggs in total, and a magical four survived their life’s first great challenge. The incubation period for this species is quite long and could take up to 9 months – but is more than worth the wait!

A very excited Neal Martin (Reptile Curator), has been nurturing them in our Animal Care Centre, to ensure the highest possible survival rate. Their living quarters are kept at a toasty 25 -28 °C, and just to be sure, also includes a cozy 40 °C heat-pad for ‘cuddle time’. Their teeny-tiny meals include fresh and juicy foods like baby marrows, green beans, rocket, hibiscus flowers, cucumber & spekboom leaves. 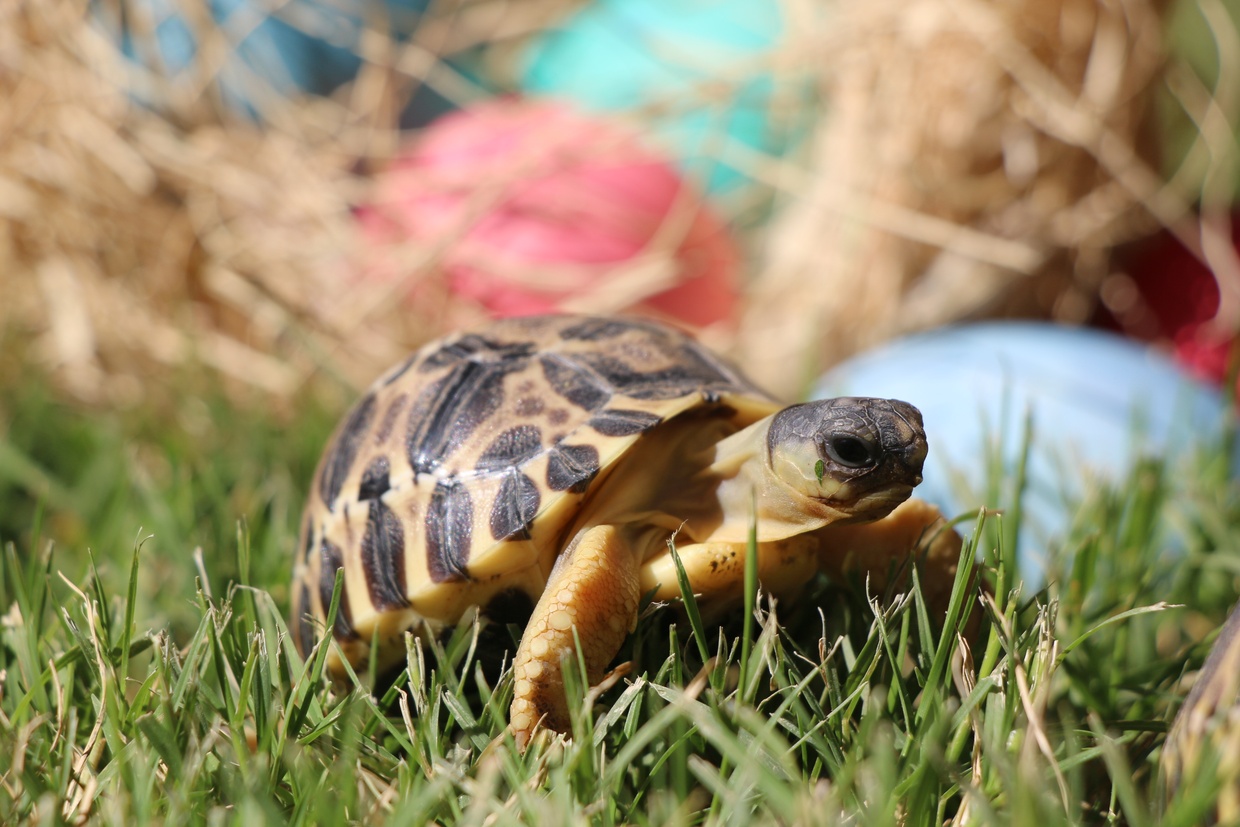 Radiated Tortoise hatchling, slightly longer than a strand of grass

Narinda Beukes, Zoological Director, is the PAAZA (Pan African Association of Zoos and Aquaria) studbook holder for the Radiated Tortoise. A studbook in animal husbandry is an official list of animals within a specific breed whose parents are known. All ethically operating and responsible facilities should be contributing to each species local studbook, to ensure efficient records of the species in a captive environment. We are passionate about keeping appropriate records, as it coincides with their efforts in creating a genetically viable and sustainable group to contribute to the international populace. 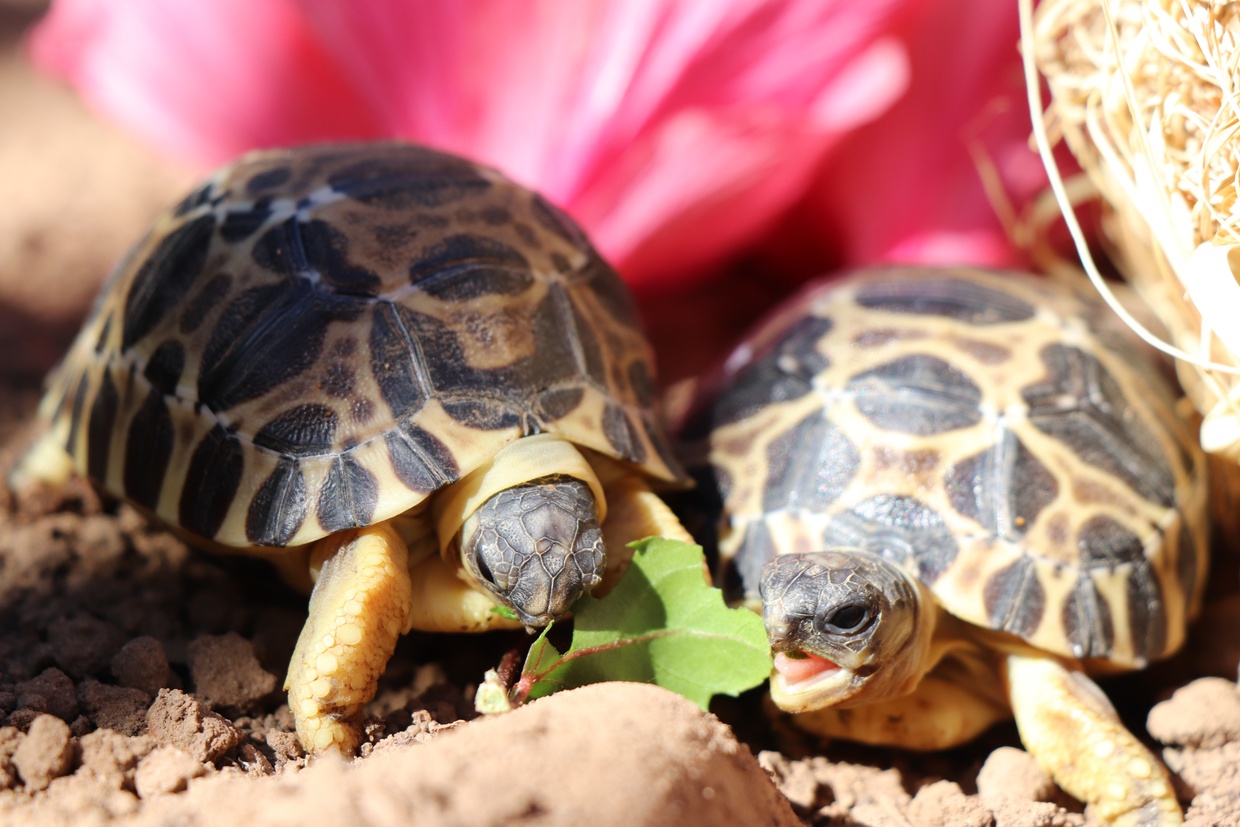 The species’ name Radiated Tortoise comes from their carapace which is dazzlingly marked with yellow lines radiating from the center of each dark plate of the shell. Although few things surpass a hatchlings’ cuteness, good genes surely make good babies and credit must be given to their 78-year-old mom and beautifully marked 33-year-old dad.

Known as the world’s most beautiful tortoise, these four siblings are invaluable for a species truly facing extinction. Sadly, beauty has also made them one of the most sought-after tortoises in the world - and history has proved many times over, that humans are capable of awful things. Human consumption and the illegal pet trade have removed many radiated tortoises from the wild, and within their native range, Madagascar, they are now only found seldom and sporadically.

The Convention on International Trade in Endangered Species of Wild Fauna and Flora (CITES) has classified the radiated tortoise as an Appendix I species for which there is no legal export or import, yet they often appear in the black-market pet trade in Southeast Asia. Human consumption also remains a major concern in Madagascar, where eerie and emptied shells can be found on the sides of roads – especially over Easter & Christmas.

Thankfully, this will never be the fate for our new residents. Their birth is a milestone for conservation and has brought with it, new hope for the entire species’ survival. Though still young, these 6cm hard-shelled gems have a massive role to play in the awareness, education, and preservation of a species, who should we lose them, would leave a very dull and unadorned hole in Mother Natures crown. 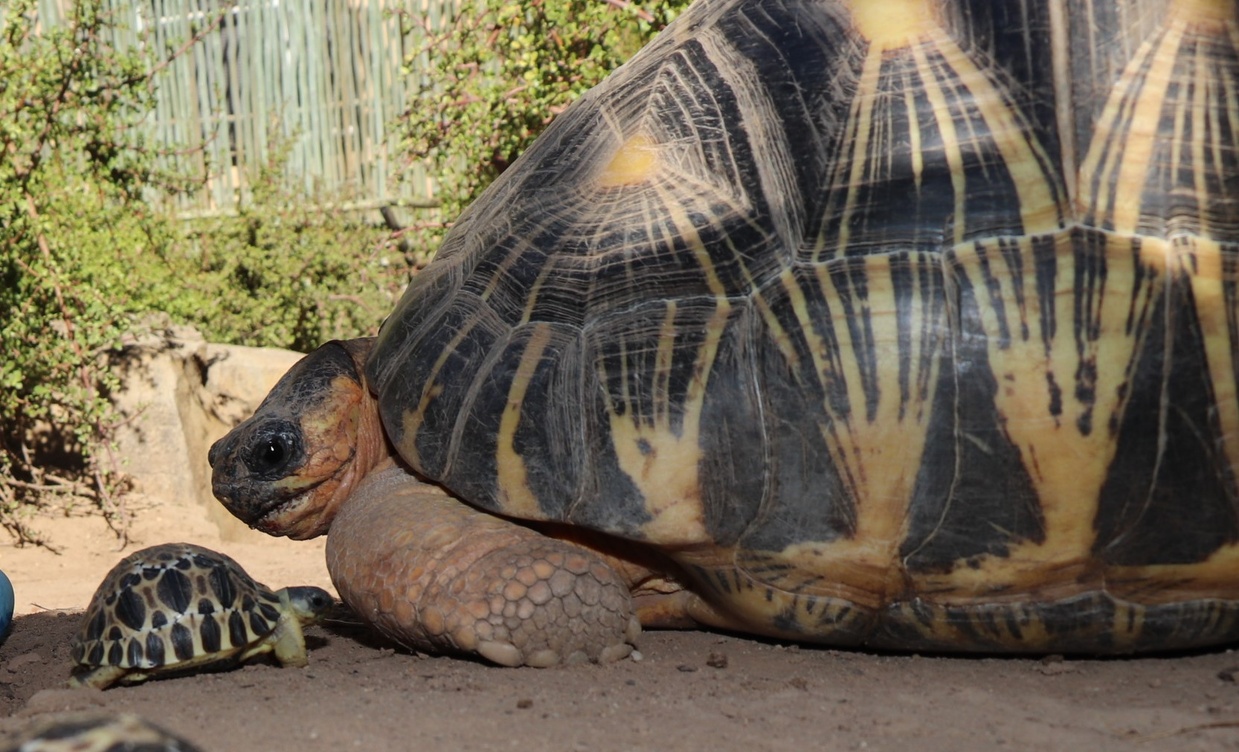