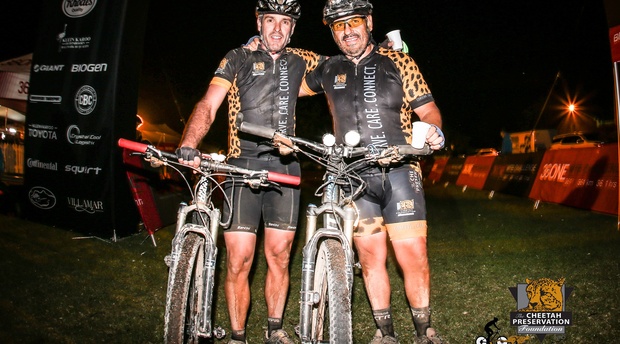 Just recently, Cango Wildlife Ranch was represented in a local Dryland event where we proudly launched our Cheetah Preservation Foundation as a Non-profit Organisation!

Just recently, Cango Wildlife Ranch was represented in a local Dryland event where we proudly launched our Cheetah Preservation Foundation as a Non-profit Organisation!

Hugo Du Plessis, our Operations Director, took part in the 361ONE challenge at the end of April. The 36ONE is a grueling mountain bike endurance challenge covering 361 kilometers over a strenuous terrain from Friday through to Sunday, where riders experience the intense heat of the day and the cold dark silence of the night as they power ahead over 2 days. Hugo committed to this challenge to raise awareness and funds for the Cheetah Preservation Foundation with the aim of completing it in 30 hours in honor of Cango Wildlife Ranch’s 30 year anniversary!!

The Cheetah Preservation Foundation was founded in 1988, with the principal aim of ensuring the survival of the cheetah and other endangered species, as well as educating visitors about the plight of the these animals. This Foundation also gives our visitors the opportunity to become pro-active in the conservation of endangered species, by joining as members or donating and thereby contributing financially to various conservation projects. Although we have done over 2 decades worth of great work under this name, we are thrilled to be able to announce that the Cheetah Preservation Foundation is now a non-profit organization! Members of the public were invited to pledge per km of Hugo’s journey, or alternatively donate towards the event. Funds generated from the specific event are allocated towards constructing more cheetah camps at the Jill Bryden-Fayers Private Cheetah Reserve, whilst a portion of the funds will be donated to Vulpro, The Madagascan Fauna Group, The Cape Leopard Trust and the Endangered Wildlife Trust.

We are proud to say that Hugo defeated the challenge and crossed the finish line, with Louis Lategan (who partook in the last 180km) in a superb 25 hours and 24 minutes! Please take note of the … cool-cat Cheetah Preservation Foundation cycling kit!

On behalf of Cango Wildilfe Ranch we would like to say a huge thanks to everybody who provided motivation through sponsoring pledges and donating towards this initiative.

And the cherry on top… the 2nd place winner of the Full Solo 361 Women's division, Johanna donated her prize money to the value of R 5 000-00 in support of the Cheetah Preservation Foundation as well. Thus far, we have raised R 30 000-00! Thank you all!