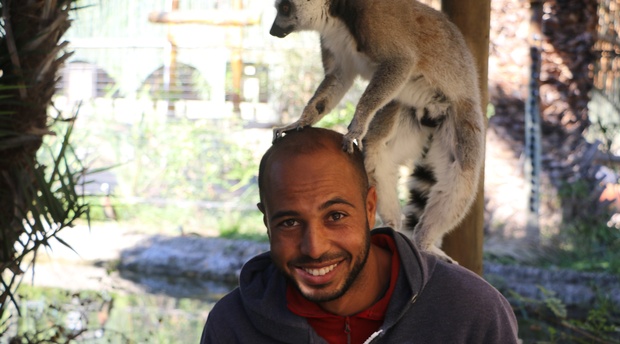 We often meet great people, but yesterday we had the privilege of meeting a real-life adventurer, with a flair for nothing else but freedom.

Yassine Ghallam (34) made his way to Cango Wildlife Ranch from Prince Albert, after spending the night on the snowy Swartberg Mountain. After excitedly telling staff about his journey we just had to know more and met up with him after he spent some time with Raven, our ambassador adult cheetah.

He tells of walking from Morocco to Senegal and then riding his bike for over 23 500km to Mzansi.

From Senegal he decided to continue his journey on a $100 bike, 'because walking will take too long'.

With his bike he travelled from Senegal through Cameroon, through Gabon and the dangerous rebel territories of the Congo. He passed Angola, and after being asked for a Visa at Namibia's border he turned to Zambia instead. He made his way through Mozambique and Swaziland after which he made his way into South Africa.

Ghallam is writing a book about African culture, food, lifestyle and languages.

“My dream is to see the whole world,” he said.

Yassine travels without money and relies on the giving nature of our African culture.