The extraordinary life of Penny... 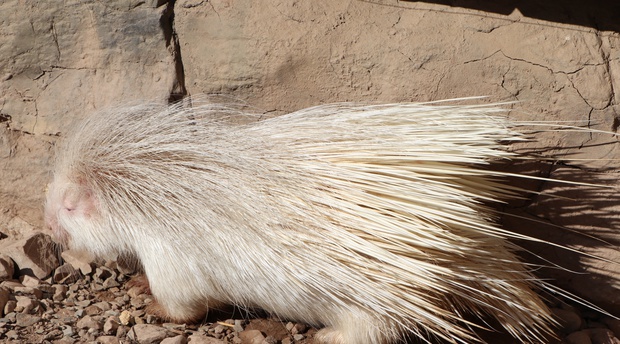 Selfless, resilient, and steadfast are just some words to describe, Penny, our Albino Cape Porcupine. She is not just living her best life, but she is also living her third chance at life after having faced a few challenges of her own.

Tenacious and wild-born, Penny joined our animal family in 2012 after being caught in a guillotine-style drop-gate trap. A farmer contacted us requesting help after discovering her. We arrived at the scene, and there she was, frantic and injured. The heavy trap door had shut on her face which shaved a substantial section of her ‘forehead’ clean-off, right down to the bone. Knowing we were in for a challenge, we took her in and conducted 6 months of medical treatment. The lengthy treatment and healing period meant that Penny was no longer eligible for release. We opted to introduce her to our young, lone male porcupine, Prickles. He was brought to our facility by a local farmer who found him nursing on his mom’s deceased body. She had been attacked by dogs and did not survive the ordeal. 2 years down the line, Prickles met his new mate, Penny. Their initial ‘flight or fight’ reaction quickly faded into love at second sight. The pair bonded much faster than any of us anticipated and a few months later we were surprised with two itsy-bitsy porcupets, PJ and Popcorn. Now all grown up, this close-knit family live harmoniously.

Being nocturnal, the porcupines have access to both their day and night enclosure. Upon arrival at work, carers immediately noticed Penny limping and she had little to no movement in her right back leg. She was sedated and transported to our vet for closer inspection. Penny’s leg was shaved which revealed terrible bruising. Our concerns mounted. Radiographs were then conducted and sadly  they confirmed the worst, a complex fracture in her upper leg which must have been as the result of a fall, unusual for such agile creatures. All options were investigated and based on the placement and severity of the injury, amputation was recommended. A decision not to be taken lightly, an impromptu welfare meeting was held, and it was decided that exploratory surgery  was necessary to determine the course of action but despite all efforts, amputation became the only recourse. Her anxious carers stood by as the operation went underway, knowing full-well that the success would lie in her recovery.

What could only have been a nasty fall, unusual for such an agile creature, had the team baffled. An injury of this sort could easily occur in the wild but survival would be unlikely – especially for Penny, whose albinism makes her even more vulnerable for predation.

The procedure took a gruelling 4 hours and her carers found it difficult to witness. After surgery, Penny was brought back to the ranch where she was placed in the our Animal Care Centre to give her time to regain her strength. She was then moved to her night quarters to be near her porcupine family but remained separated by a mesh barrier. This enabled both healing whilst maintaining the familial social structure. When one is removed from an enclosure, for even a short period of time, it can affect the hierarchy and can result in fighting. Penny, understandably a little grumpy, didn’t make life easy on her carers who had the challenging task of keeping her area clean and sterile to reduce the chance of infections. She received medication twice a day, concealed in her favourite treat, dates.

Some days she seemed a little tired, but overall, it was amazing to see how quickly she adapted and recovered. A mere 6 weeks is all it took!

Now, Penny is back with her prickly family and boy is she running circles around them! 3 legs and all! This matriarch and her instinctive ability to adapt and overcome is a testament to the strength of her character, the wonders of nature, and the skilled and passionate people who helped her get there.