Today is a big day as Agatha, our adored radiated tortoise, celebrates her 80th birthday!

Not only did Agatha enjoy her morning serenade and treats, but she did so in the absolute comfort of the toasty warm Animal Care Centre on this cool winter’s day. Radiated tortoises are critically endangered, so we do all that we can to protect and care for Agatha and her species.

Indigenous to Madagascar, these tortoises occupy a narrow band of spiny forest along the island’s southwest coast. Available information indicates that the species has disappeared entirely from about 40% of its past range through a combination of habitat loss and exploitation, and that remaining populations have been severely depleted by ongoing land destruction, bushmeat consumption, and even sadder for ornamental purposes. It is estimated that their population has declined by 80% over the past 5 decades.

Our Zoological Director, Narinda Beukes is the regional manager of the International Studbook for Radiated Tortoises which records the captive population which assists in contributing to the declining wild population. As a mom to 5 young Radiated Tortoises, who hatched 2 years ago, Agatha has made a phenomenal contribution to the population management of these rare and beautiful Reptilia.

The oldest radiated tortoise known to man, lived for an estimated 188 years! So, if wisdom comes with age, then Agatha will surpass us all, with an entire century ahead of her.

As a valuable ambassador for her species, her message is crystal clear; protect wild habitats. It is a responsibility that we all share, and we need to make better behavioural and lifestyle decisions, for the well-being of our planet.

Agatha, may your many years ahead be filled with juicy treats, sunny days and the promise of a better tomorrow for our planet. 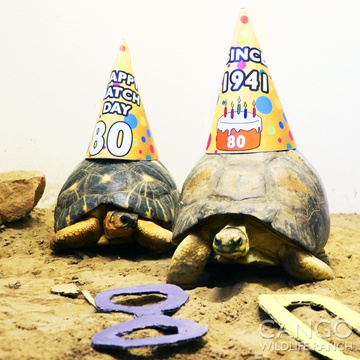