Poaching can happen on your doorstep too 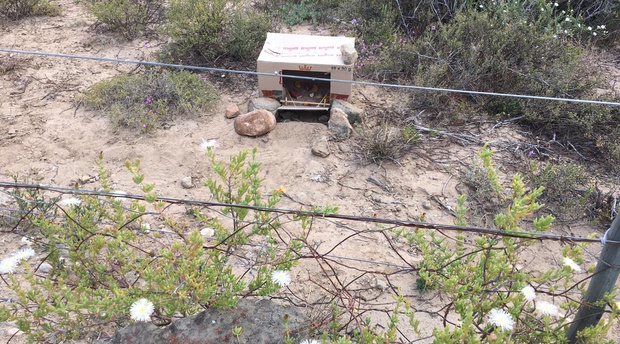 Poaching is a harsh and ugly reality threatening a multitude of species globally. In many cases, it is single-handedly responsible for the endangerment and extinction of a species. Daily, we broach this subject on our educational guided tours to educate visitors on the plights of the species we house and the impact of bushmeat crisis. Never, not once, did we ever think that we would experience it on our own property.

As per the images, these boxes, ie. tortoise traps, were discovered by our staff on our Private Reserve last week. Suspicions were roused after our staff saw a person fleeing the area, in the distance, during a routine trip to the reserve. Our staff were unable to find the culprit, but thankfully, they found the traps that had been placed. Immediately, local authorities were notified, and the boxes were removed.

The illegal capturing of wild animals is motivated by several reasons but there are two main factors, for food and for trade. Eating bushmeat can be attributed to cultural habits and preferences, and quite simply for survival. Trade though, is motivated by the demand of ‘valuable’ animal parts and products, by locals for socioeconomic benefits, and that of large international organized crime syndicates. This is fuelled by unproven religious, aphrodisiac, and medicinal uses, exotic food dishes, trophy hunts, and the illegal pet trade. But poaching does not only affect fauna, but flora too. Cape Nature is currently facing challenges in the Western Cape with succulent plant poaching. Believe it or not, the plant trade has changed into an operation much like that of rhino poaching, where the main role-players sit offshore, and the poaching is done by locals. Poachers are going into specific species localities and harvesting thousands of endemic plants that have limited distribution, thereby decimating natural populations. The fact that the plants are found nowhere else in the world makes them highly sought after and attractive to international collectors, leaving devastating effects on our biomes.

To say that we were furious and disheartened to find the traps is an understatement, but the silver lining is that now we can share this with thousands of wildlife advocates, to raise further awareness.

These simple but effective traps can be produced with very little and can be placed under bushes drawing minimal attention. It is also the perfect time of year, as all these little creatures become more active with the change of season. A video, demonstrating how the trap works, can be viewed in the comments section of this link: https://www.facebook.com/633406110021557/posts/4895353487160110/

Should you encounter anything of the sort whilst out and about, or should you ever witness suspicious activity pertaining to the natural environment, please report it to your nearest Cape Nature office or local authority.