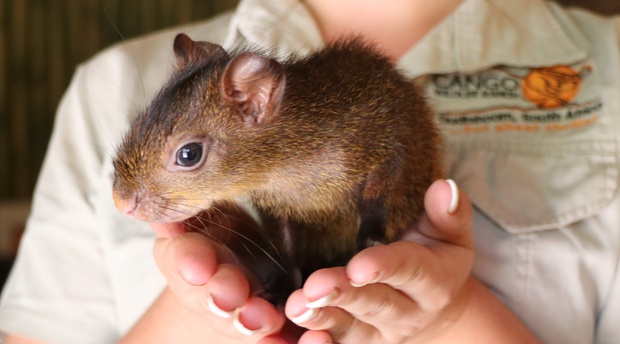 Forming part of our ongoing Amazonia route, our little Agouti family shares a beautiful enclosure adjacent to our Rainforest Bird Aviary. Agoutis are large tropical rodents native to Central and South America, similar to Guinea Pigs but with much longer legs, that can launch them up to 6 feet in the air!

Unlike many small rodents that are born hairless and with closed eyes, Agoutis are born with a beautiful coat and eyes wide open, as we witnessed on 16 February when Mommy Agouti gave birth to two tiny bright-eyed and red-rumped pups. Their enclosure was closed to the public, to give the little family time to nurse and bond, under the supervision of our Zoological Team.

The next morning at sunrise, Craig Gouws (Zoological Manager), headed out early to check on mom and babes, slightly concerned by the unusual drop in temperature that morning. Upon arrival, Craig was met with the sound of a calling baby… and instantly he knew, all was not okay. It is presumed that a much older Agouti sibling separated the mom and new-borns, as it was attempting to latch onto mom upon Craigs arrival. The first 24 hours of any new-born’s life is critical, and sometimes nature can be a little too cruel…

Craig followed the call and found a pup huddled up and alone. He scooped it up and searched for the second, which he quickly found, but sadly it had not survived the night. Craig jumped into action, placed the pup in the incubator, prepared an electrolyte solution and alerted our hand-raising team. The first day was very intense, and the little pup was fed every hour on the hour, both day and night. It then moved to every 2 hours and days later to every 3 hours. This little girl, who first weighed in at 180 grams, has reached 500 grams in just a month!

Our team is working on reintroducing her to the group during supervised day sessions whilst still caring for her at night. Mom has shown little to no interest in her, nor has she shown interest in mom. The other Agoutis seem relaxed around her – all indicators that a full reintroduction will be successful with time.

Her carers say that she is a handful, both literally and figurately, but an absolute delight. The epitome of ‘spunk’, a little live-wire, survivor, self-taught escape artist, and the equivalent of a lightning bolt with fur.

Our social media appeal for assistance in naming her did not disappoint. Dozens of amazing suggestions rolled in and the winning name, Aella, was selected by our staff.
Aella (pronounced A-ye-lla), was an Amazon warrior in Greek Mythology, and the name suitably means whirlwind. Could there be a better description of her? We think not!

Thank you Trudie Bester for the superb suggestion!